His early work was local press, camera retail, pro cycling and scooter "mod" photography. Also worked for local and national tv and radio - theatre and film, and the record industry in the recording studio environment.

Working with young people began with The Scout Association & college employment, and campaigns for recognition of conditions such as dyslexia and what is now known as ADHD, and it’s impact on young lives and their potential future. This extended to school drama and working in schools. This lead to working in various areas of work with young people from the physically disabled to runaways and young offenders.

"When we began working on what is now called "special needs" - there simply was no support, no true understanding of autism and ADD if acknowledged was put down to kids drinking to much Sunny D. Those of us in the various campaigns for recognition  of autistic conditions had little support - we taught ourselves and then went on to teach others"

William David has worked in or with various aspects of the media industry and was active in the formation of Independent local Radio , and later the expansion of radio within the BBC.

Drama and creative arts  formed a major part of his early work, working in schools drama and youth drama. With most of his friends either teachers or actors it was hard to avoid!

Throughout this continued to work within camera sales and distribution - and that of radio and television.

The Halfling project began in 2014 and was set to have the freedom to develop rather than a strict structure from the start.

The project acknowledged the impact of autism in  performance and arts, and also campaigns for recognition of the autistic spectrum and allied conditions within the legal and justice system in particular that of young offenders.

The project is structured towards males and open to all.

It majors on working with those who wish to or actually do perform or wish in some way to work in front of the camera or on the stage. Further it works on a confidential basis with those who seek help and self understanding or to build up social skills and confidence.

The project is designed to be in itself policy neutral, but not afraid to speak out.

act4ward began in 2016 but it's official launch is set for 2018. More details can be found on the act4ward website and social media.

William David holds full clear DBS/CRB status and a strict policy in regard to the conduct in working with young and often vulnerable young people.

The thing I must always remember when working on Halfling or act4ward is it's often peoples future and careers we are working towards. They put a lot of trust in me, and I respect that always" 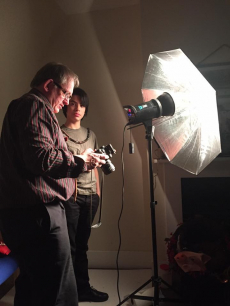