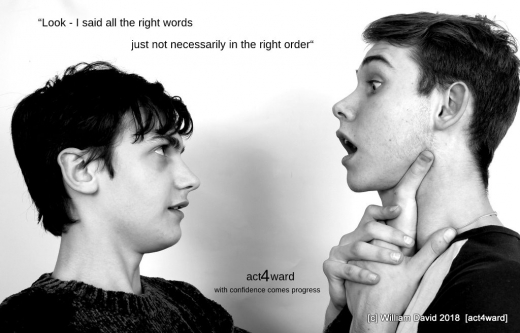 Remember in your English/drama class at school where you were put into groups and told to improvise a 3 minute drama?

Well it can be like that in the industry to with more and more drama productions favouring setting the scene and the actors playing it by instinct and Improvisation.

Not easy when they may have to repeat it more than once for the cameras.

Improvisation is not an easy way out - it can be really hard, but then learning a script can be quite daunting too.

Within act4ward I admit I much prefer improv - and often will give the context and idea behind a scene and let the actor take it from there.

But sometimes [Shakespeare is an obvious exception] the performance is scripted.

Also even with improv in filming as well as modern theatre you still have camera scripts, lighting scripts and so one to be aware of.

In the tradition of act4ward the aim is to keep things simple with some scripts and a lot of improv  - and as an actor develops their talent bios the work to their strength or build up work to improve on their weakness in a particular area.

Here Jonathan Thorp had the basic outline of "little kev" and the previous little Kev video's by SonnyBoy Skelton. But in this video playing another character auditioning for the little Kev role [keep up] he make it his own by way of a fairy tale. True improvisation of a basic sketch of a character.

ahhh - every school pupils dream drama - Shakespeare - here read by Luke Blackmore as an early run through before final performance. To improvise Shakespeare can lead to a comedy of errors!